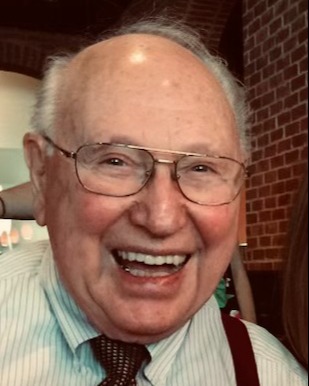 Albert A. Milanesi, 99, of Davidson, NC, passed away on January 1, 2023. He was born in Pordenone, Italy on August 20, 1923 to the late Peter Milanesi and Antonietta Dirindin. Along with his parents, Albert is preceded in death by his wife, Leonilda (Carrabotta); and brother, Edward Milanesi.

Albert spent most of his life in the Chicago area, raising his family with Nilda, the love of his life for over 60 years, and had an extensive teaching career, namely as professor at Northeastern Illinois University. Albert had a love of great literature, music, and language.

He leaves behind his wonderful legacy… three children, five grandchildren and eight great-grandchildren (with another on the way), whose company he delighted in. He is in the company of those he loved, as well as the great thinkers, writers and composers who helped shaped him.

A funeral service will be held on April 13, 2023 at St. Philip the Apostle church in Addison, IL. Following the service Albert will be laid to rest in Mt. Carmel Catholic Cemetery in Hillside, IL. Local services in North Carolina will be held privately by the family.

Memorial Donations, in Albert's name, may be made to Hospice and Palliative Care – Charlotte Region, by clicking on the link below or by mail, PO Box 470408, Charlotte, NC 28247.