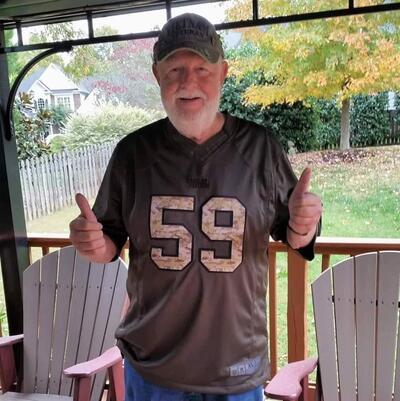 Charles H. (Chuck) Hilliard of Cornelius, NC, passed away peacefully in his sleep in the early morning hours of Friday, December 10, 2021.  He was born March 24, 1942, in Ridley Park, PA to Donald R. Hilliard, Sr. And Doris Newell Squibb.

Chuck was truly one of a kind, with the greatest and most infectious laugh you’ve ever heard.  There was not a person nor animal that he encountered that couldn’t feel his overwhelming love and acceptance.

His 79 years on this earth were anything but uneventful.  Chuck served his country in the United States Air Force followed by several years in the United States Merchant Marine where he traveled to numerous ports all over the world. His stories of his many amazing adventures are numerous.

After Chuck’s final voyage with the Merchant Marine, he stopped in Charlotte, NC to visit his brother Don.  He had no idea that trip would change his life forever.  One day, while at the pool of his brother’s apartment complex, he laid eyes on his future soulmate, Barbara Coulter.  Six months later, they would be married on Valentine's Day, 1970.  In his eyes, his greatest accomplishments in life were his 52-year marriage, his children and his grandson. He was proud beyond words.

After following in his father’s footsteps with a long career in insurance, Chuck decided to dedicate his time to helping others.  He specialized in Substance Abuse Counseling and saved countless lives in the process.  He retired in 2006 and spent his time playing with and teaching his grandson life lessons.

Chuck was an avid Carolina Panther’s Fan and attended all home games until he was no longer physically able.  Over the last three years, he courageously fought prostate cancer and won, and beat small cell lung cancer last year.  When it returned this year, he refused to go without a fight.  Chuck was the strongest man we’ve ever known and while he refused to give up, the treatments finally took their toll on his tired body.

He was the most amazing husband, father and grandfather to his family.  Life will never be the same without him, but we take extreme comfort knowing that he is now pain free. We would like to thank Dr. Barbara Meyer, his primary care physician of many years, and truly one his favorite people, as well as the doctors and nurses at Novant Cancer Center in Mooresville and Dr. William Downey of Sanger Heart and Vascular.  Without all of you, he would never have been in our lives so long, and we are truly grateful.

Chuck is survived by the love of his life of 52 years, Barbara Coulter Hilliard.  He is also survived by his son, Matthew Sean Hilliard of Raleigh NC, daughter Ashley Hilliard Simon and husband Scott of Cornelius NC and grandson, Ashton James Simon of Wilmington NC.  He was predeceased by an infant son, Sean Thomas Hilliard, as well as his parents Don Hilliard Sr. (Jean) and Doris N. Squibb (Roland).  He is also survived by brothers Don Hilliard Jr. (Pat) of Rockford IL, Bruce Hilliard (Kathy) of Bend OR, Gary Hilliard of Bend OR, and Thomas Brown of Essington PA, as well as his sister, Karen Blum (Tom) of Winfield IL.  His survivors also include numerous nieces and nephews, as well as his 3 fur babies Abby, Izzy and Zoe.

A memorial service, with Military Honors, will be held on Saturday, January 22, 2022, 4:00 P.M. at Raymer-Kepner Funeral Home & Cremation Services of Huntersville.  The family will receive friends immediately following the service.

Because of his significant love of animals, in lieu of flowers, memorials may be made to: The Greater Charlotte SPCA.  PO Box 77491 Charlotte, NC 28271, or the charity of your choice.

The Hilliard family is under the care of Raymer-Kepner Funeral Home.  Condolences and memories may be shared at www.kepnerfh.com.

To order memorial trees or send flowers to the family in memory of Charles H. Hilliard, please visit our flower store.