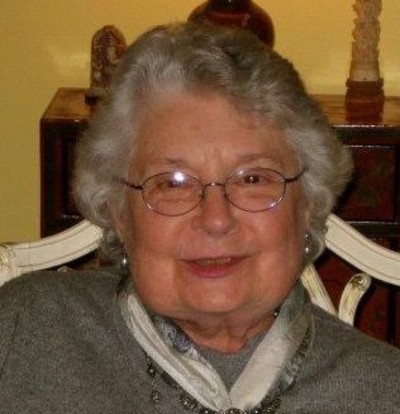 Elizabeth (Betsy) Perry passed away December 10, 2019 at The Pines in Davidson, North Carolina. She was born July 10, 1933, in Montgomery, Alabama, to William David Smith, Jr. and Elizabeth Sanders Smith.

She lived in Ramer, Alabama, in a group home for teachers from birth to eight years old. She
truly thrived in the communal care environment and always had nothing but fond memories of
that time. Then, her family lived in Jacksonville, Florida until her father, a captain and leader in
the National Guard, was called to active Army duty a year before Pearl Harbor. They moved
many times over the next several years, including to Brownwood, Texas; Baltimore, Maryland;
Ozar, Alabama; Lebanon, Tennessee; Phoenix, Arizona; Kansas City, Missouri; Cambria,
California; and Grass Valley, California, before returning to Jacksonville, Florida, where she, her
mother, and her sister Jane stayed until the end of World War II.

Betsy’s father returned home a few months after the end of the war. He was asked to become a
regular Army Officer (Colonel) and after a couple of months’ rest was posted to Panama, and
they were able to join him there for two years. They then went to Washington, DC, for one year,
and then spent four years in Arlington, Virginia. Betsy had three years (starting in 10th grade) at
Western High, where she graduated in 1951 and went to secretarial school. Her father was
sent to Formosa for 18 months, so she, her mother, and her sister went to live in Birmingham,
Alabama until he returned.

Betsy and Jack were married in June 1957, so Betsy graduated in August 1957 as Betsy Smith
Perry. They moved to New York for Jack to go to graduate school at Columbia University and
Betsy worked there. Jack completed his Master’s degree and began his doctorate. Fourteen
years later, he was given a year off from the Foreign Service to complete his Ph.D. at Johns
Hopkins. Their son, James, was born when they lived in New York. After New York, they lived
in Falls Church, Virginia near Washington, DC. Their first daughter, Leslie, was born in
Alexandria, Virginia.

In 1962, Jack and Betsy went to their first Foreign Service post of Moscow, and in 1964 they
moved to France to spend five years (daughters Jennifer and Laura were born there). Jack
worked for NATO for two years and then at the embassy for three years. They went on to live in
Prague, Czechoslovakia; Stockholm, Sweden; Sofia, Bulgaria (where Jack served as
Ambassador for two years), Charleston, South Carolina; and finally settled in Davidson, North
Carolina in 1986.

Betsy spent much of her time thinking of and caring for others, including entertaining single
embassy employees at Thanksgiving, hosting international guests at their various posts, running
a book club at The Pines of Davidson, and caring for her family and grandchildren. She was
renowned for her excellent cooking skills, her breadth of knowledge of literature, and her
phenomenal memory. Betsy also learned to be a yoga instructor and even taught overseas to
ambassadors, marines, and other friends. She had a fondness for cashmere sweaters, tea from
England, Joy perfume, and flowers, especially daisies. Her children and grandchildren will
always cherish those items in her honor.

Betsy often talked about her fulfilled and blessed life with her many domestic and international
travels both as a child and an adult (she moved over 36 times in her life!), and about her
wonderful marriage and family. As Jack wrote to her on their 51st anniversary, “We did ‘live
happily ever after,’ so the old romances did come true - and remain true to this day. I do love
you with my whole spirit and mind and soul, and I am daily conscious of, and grateful for, ‘a
beautiful love to share.’ Everything else comes and goes, rises and falls, but our love remains
rock-steady. You are the loveliest and best person I have ever known, and I rejoice in you and
in our love.” Betsy and Jack were married in 1957 and Jack died in 2014, just shy of their 57th
anniversary. Their marriage was a partnership as well as a love affair, and they had mutual
respect and affection that is unsurpassed by any other. Mom also always felt that wherever
they were together was “home.”

Betsy Perry is survived by her four children and eight grandchildren. The children are one son,
James William Perry of California, and three daughters, all of Atlanta, Leslie Perry Wingate,
Jennifer Perry Karpenko, and Laura Perry Bates. The grandchildren are Ellen Perry, William
Perry, Sarah Wingate, Emily Wingate, Sydney Karpenko, Zachary Karpenko, Richard Bates,
and Rebecca Bates. Her daughter-in-law is Elizabeth (Betsy) Hanes Perry, and her sons-in-law
are Paul Karpenko and Brandon Bates. She is also survived by her nephew, Dale Akin of
California, who was her only sister’s (Jane Smith Akin) son with her husband, Duane Akin, and
by Jane Perry Adams of Atlanta, her sister-in-law (Jack’s sister) and family.

Services will be held privately by the family.

In lieu of flowers, donations may be made to The Ambassador Jack Perry Scholarship Fund,
Dean Rusk Program, Davidson College, Davidson, NC 28035; The Ada Jenkins Center; or The
Salvation Army.

Raymer-Kepner Funeral Home & Cremation Services is serving the family.  Online condolences and memories may be made at kepnerfh.com.

To order memorial trees or send flowers to the family in memory of Elizabeth Ann Perry, please visit our flower store.