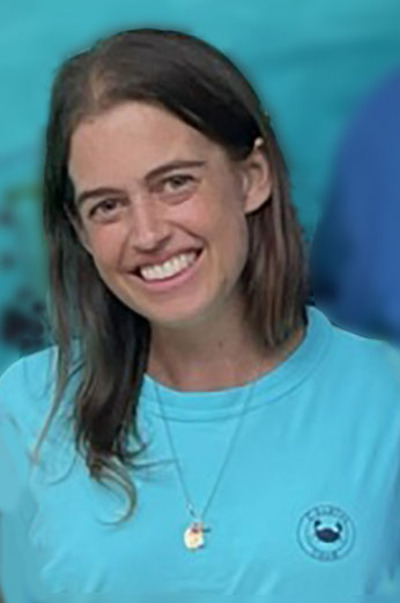 The world lost one of its finest people when Jessica Stevens passed away on April 14 at the age of 35 after a heroic three and a half-year battle with cancer.  Her strength and grace during that time was nothing short of remarkable. She lived her life as an adventure, always having her sights on her next goal.  Along the way she touched many lives with her generosity and kindness.

She was born October 28, 1986, to Pat and Bill Martin. Growing up in East Lyme, Connecticut, she was always active, participating in an assortment of activities to include Girl Scouts, cheerleading, softball, horseback riding and piano lessons. There was little she wouldn’t try.  Her favorite sports became swimming and crew, where she competed on a varsity level.  At 15 she became a lifeguard. This then became a summer job at the Yale Outdoor Center for several years.

After attending a semester at Quinnipiac College, she enlisted as a reservist in the Coast Guard and shortly after decided to take a one-year active-duty assignment in Seattle where she worked at an anti-terrorism unit.  This led to a life-long service with the Coast Guard.  She served as a coxswain for small boats ensuring safety and law enforcement on the water.  She held many qualifications, and her motto was always, “failure is not an option.”  In addition to Seattle, her tours of duty included six months at Guantanamo Bay in Cuba, a cutter in Massachusetts and stations in Connecticut and North Carolina.  She also worked as an advocate for female victims in the Coast Guard.

After the birth of her son, she left active duty and became a reservist, to ensure time with her family.  She worked briefly at a Women's Crisis Center and obtained her realtors license, before pursuing her life-long passion for flying.  Having had her first flight lesson on her 16th birthday, it was always her dream to fly. She went on to flight school and became a flight instructor and eventually the Director of Operations for an independent flight school in NC.  During one of her flights (at 7 months pregnant), the plane engine failed, and she made an emergency landing in a cow field with no injuries or damage to the plane. When flying with Jess, you always knew you were in capable hands.

She received her BA degree from American Military University and was halfway through her MBA at the University of North Carolina at Charlotte before her cancer returned for the second time.

Jess loved the ocean and being out on the water, pop up thunderstorms and the scent in the air that followed, and was a devoted Red Sox and Patriots fan.

Jessica’s husband, Scott Stevens, Jr., stood closely by her side throughout her medical struggle.  He was deeply devoted to her care including being the donor for her liver transplant at Pittsburg Hospital.  He was always there to ensure her medical and emotional needs were met.

She is survived by her husband, Scott Stevens, Jr, her son, Colton, her daughter, Hadley and her stepdaughter, Ruthie, her parents, Bill and Pat Martin, her brother, Corey and her honorary brother, Jon.  She is also survived by Scott’s family - parents, Scott Sr. and Cheryl, siblings, Adam, Maddie and Abby, Grandmother, Kathy Adams, and aunt, Pam McCreary. As well as her cousins and many, many friends.

She was many things to many people.  An amazing daughter, sister, wife and friend, but most importantly, she was a Mom.  Jessica will always be remembered for her generosity of spirit, her kindness, her sense of adventure, her positive outlook on life and her beautiful smile.  Her thoughts were always of others, touching many lives throughout her short life.  She was loved by many.

The family would like to thank the Coast Guard, the many nurses and doctors in the Atrium network that helped her along the way with a special thank you to Oncologist, Dr. Kadakia.  We would also like to thank the Forged Brotherhood Motorcycle Club, Huntersville First Baptist Church, First Baptist Church Daycare and the many friends and family that have supported us, prayed for us and loved us during this journey.

A memorial service is planned for Friday, April 22 at Huntersville First Baptist Church, 14813 N Old Statesville Rd.  Visitation will be at 1:00 with the service at 2:00.  A second service for her friends and family in Connecticut will be held at the Flanders Baptist Church, 162 Boston Post Rd in East Lyme on the following Friday, April 29 at 1:00. A private burial with military honors will be held at Arlington National Cemetery.

The family has asked friends and family to write some memories of Jessica that can be compiled and saved in a book for her children (submit under "Condolences" section below).  In lieu of flowers, contributions in her honor can be made to Veterans Airlift Command (www.veteransairlift.org) or to the Waterford Country School in CT.

To order memorial trees or send flowers to the family in memory of Jessica Elizabeth (Martin) Stevens, please visit our flower store.