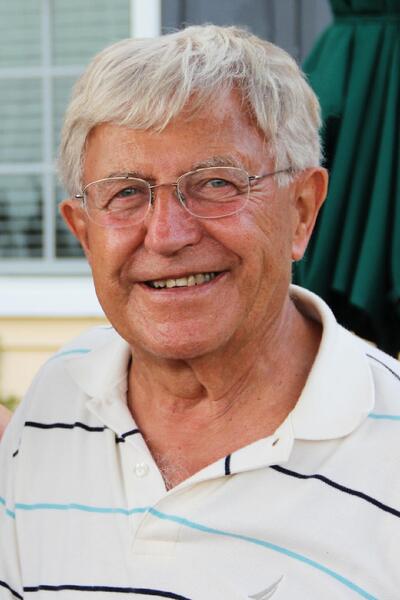 Johan Christiaan Koppier finished his earthly journey May 1, 2021. Young Hans, as he was known, was born July 24, 1933 in the town of Oegstgeest in the Netherlands to Johan Christiaan Koppier and Lydia Grietje Boelee. Growing up during WWII occupation, his family faced challenges that contributed to Hans’s strength of character and perseverance. Soon after the war ended Hans met his future wife, Ineke van Galen, through their mutual friend Aat de Roode. They married in 1956 and embarked on the adventure of immigrating to the United States with Ineke’s cousin, Fini, and her husband Wim. The plan was for a two year trial of “Living in America” — it turned into a lifetime, and soon Hans became “John”. The young couple settled in Stevensville, Michigan where they raised their three children, Ingrid, Anita, and Hans.

John’s career began in southwestern Michigan as an electrical engineer with Heath Company where he later became a product manager in consumer electronics. He continued in this role with Philips Electronics, which led him to Jefferson City, Tennessee. He worked with emerging Asian manufacturers, traveling extensively to the Far East and Europe. John introduced their products first to the North American market, then later to Europe during which time he and Ineke lived in Vienna, Austria.

However, John’s true fulfillment came as a man who went full on into his passions and interests. John’s love for the water ran deep. He was an avid boater from his early days, romancing Ineke on a small sailboat in the Netherlands. With their powerboat the family enjoyed long days on the beaches of Lake Michigan where skiing and water sports filled the summer days. Later the wind caught his fancy once again and their sailboat, the Reverie, entered the picture. Racing and cruising up and down the coast of Michigan was a joy for John and the family. As time went on, they embarked on more ambitious trips across the lake to Green Bay and to Canada’s North Channel. With the Reverie II, John & Ineke expanded their horizons on the Atlantic Ocean and later to the Bahamas. Family and friends were always welcomed aboard and a love for sailing and water was nurtured in his children and grandchildren.

A truly handy man, John could pretty much fix anything and loved creating things in his workshop, from multiple furniture pieces to cabinetry for his church’s nursery. Visitors to the workshop could see his precise mind in the dozens of samples of wood stains, meticulously scale-drawn plans for the latest project, and even delicate scale models of more complicated projects. He loved gadgets. He had an appreciation for a “well-made thing” – be it electronics, sailboats, automobiles, a well-blended Scotch or a perfect Dutch chocolate. John felt a kinship with the natural world, and he and Ineke found happiness in creating spaces in harmony with the beautiful landscape of Cherokee Lake in the Appalachian foothills. Their home was a magical sanctuary for the family for almost forty years; a haven that became the setting of countless gatherings for loved ones. It was the frequent home of Kamp Koppier, where grandchildren were welcomed into sailing and skiing, and the family bonded with food, fun, and fantastic sunsets.

Later in life, John rediscovered faith and dedicated study to learning more about Jesus. He joined First Presbyterian Church in Jefferson City and later served as an elder. After moving to Aldersgate in Charlotte, North Carolina in 2019 he joined the men’s Bible study at StoneBridge Church Community where he found great fellowship and support.

John’s Dutch family was always very much a part of his life, with regular visits to the Netherlands and many visits from relatives from “home.” John’s beloved brother, Ben, was always a special delight for him and together they created many lasting memories. John had a soft spot for a furry face as well, forging deep bonds with his rescue pups Coco, Lara, Nick and Nora.

Left to cherish John’s memory are his wife of 64 years, Ineke, his daughters Ingrid (Bob) Ward, Anita (Jeb) Blackwell, and his son, Hans (Linda) Koppier. He is loved and remembered by his grandchildren, Stefanie Ward, Kirsten (Mike) Paschal, Meagan Ward, Kate Blackwell, Hanna Blackwell, Benjamin (Matt Marone) Koppier, Margot (John Woolverton) Koppier, and Natalie Koppier. To carry on his legacy are his three great-grandchildren, Noah, Haven, and Ocean Paschal. He is preceded in death by his older brothers, Arie “Aat” and Hendrik “Henny”. John will be remembered by his younger brother, Ben, who survives him, as well as so many friends and relatives in both the United States and in the Netherlands.

A celebration of John’s life is scheduled for June 5, 2021 at 3:00 pm at StoneBridge Church Community, 3700 Prosperity Church Rd, Charlotte, NC 28269. To watch a livestream of the service, please go to https://vimeo.com/stonebridgeclt. Memorials may be given to Hospice of Charlotte, Alzheimer’s Association, or Habitat for Humanity. The Koppier family wishes to extend our sincere thanks to these groups and to the caregivers who helped John along his journey.

To order memorial trees or send flowers to the family in memory of Johan Christiaan Koppier, please visit our flower store.