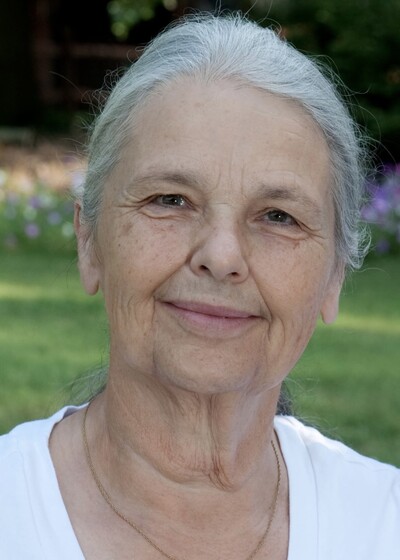 Linda Jane Culp Webb, 80, of Cornelius and formerly of Statesville, passed away November 15, 2021.  She was born in Ypsilanti, Michigan on August 29, 1941, the daughter of Ernest and Catherine Culp.

The plan continued to work briefly.  After a few months they learned that they were soon to become parents.  After the birth of their daughter, Linda went back to her job.  After about two weeks Clarence phoned her at her job.  On impulse, he asked if she wanted to be a stay-at-home mom.  She immediately said yes.  Clarence reverted to part-time status as a student.  However, his job as a programmer at MSU started his career path in Information Technologies.

Being at home became Linda’s true calling. Linda was multi-talented; now she could exert her efforts in many directions. She served her church in the music programs.  She played piano and could sing.  She would accompany congregational singing and soloists and assisted young people in preparing for music performances. She also would work with school classmates of her children.  They would come to her house to prepare for performances.

Linda retained her Latin skills from high school.  She got involved with Latin activities at her children’s high school. Biology was dear to her heart.  When each of her children had to prepare a leaf collection for tenth grade science class, Mom would drive them around to procure it.  She had learned the locations of the more difficult leaves. She enjoyed leading her grandchildren on hikes through fields and woods. She loved wildlife.  Clarence learned not to be surprised when he arrived home from work. Sometimes Linda might have some snakes and was enjoying them.  She nearly crossed the line when he was climbing the steps to enter their porch.  A rattling sound startled him. He looked at a five gallon bucket a few feet away from his face and a snake stared back at him over the rim.  It rattled.  Linda’s explanation was that she didn’t know if it was a rattlesnake and wanted to get it identified.  Thankfully, it was an imposter.

She loved to read.  Probably no one knew the Wheel of Times series better than she did. She marked the pages of the books and had copious notes about the plots. Of course, gardening was a defining activity in her life. Getting her hands in dirt, building compost piles, rototilling, planting vegetables and flowers and harvesting the results rounded out her life.  The family enjoyed eating the results of her labor.

Living a spiritual life in devotion to her Savior was the driving force of her life.  Her Bible was well used and well-marked.  Dear to Linda’s heart was serving Iredell Christian Ministries.  She was one of the founding members and served as secretary to the board for several years. Also, being involved with community prayer groups was important in her life. She helped organize National Day of Prayer activities for many years. She was an inspiration to her family and to those around her.

Eleven years ago, Alzheimer’s started its toll.  She had to withdraw from her activities and her husband gently steered her along that difficult course. She is missed. Her family is comforted to know she is where she was meant to be and the family wants to follow.

The family appreciates the loving and professional care of Hospice.  Memorial contributions may be made to Hospice & Palliative Care Charlotte Region, PO Box 470408, Charlotte, NC 28247.

A private family memorial will be held at a later date.

Raymer-Kepner Funeral Home is serving the Webb family.  Condolences and memories may be shared online at www.kepnerfh.com.

To order memorial trees or send flowers to the family in memory of Linda Culp Webb, please visit our flower store.