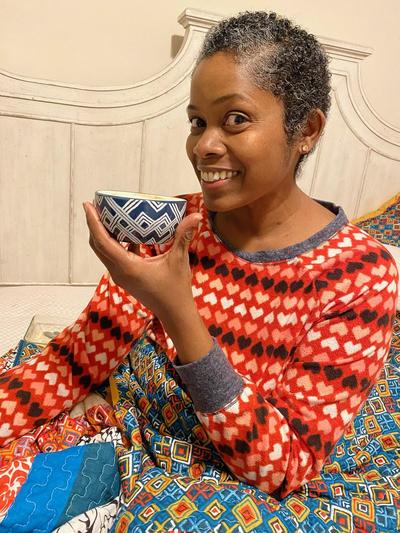 Luanna Bel Fiol, 43, went to be with the Lord on Saturday, March 21, 2020 at the Harris Hospice of Novant Health Presbyterian Medical Center in Charlotte, NC.

Luanna was born in Arima, in Trinidad and Tobago on August 12, 1976 to Milton Danglad and Susanne Henry. She was raised by her mother and maternal grandmother, Isabel Henry, in New Delhi, India.  She spent her early childhood years in New York City while her mother served in the Trinidad and Tobago Foreign Service.  Luanna studied Organic Chemistry at Brooklyn College and received her Master of Science in Nursing as a Family Nurse Practitioner at Pace University.
In her early twenties, Luanna decided to fully commit her life to follow the path of Jesus Christ, her Lord and Savior.  She and her mother were baptized at the same time at Times Square Church in 1998.  Luanna loved to sing and dance before the Lord.  She enjoyed worshipping with all her heart through various ways.  She enjoyed teaching the word of God and modeling godliness to young adults.  She had the heart of a missionary which led her on mission trips to Findland, Zambia, India, Haiti and Columbia as well as local areas throughout the United States. She left an unforgettable mark on the hearts of everyone she touched with a radiant smile and beaming countenance reflecting the love of her Lord.   She was also active in the youth ministry.  It was while serving in a hospitality ministry in 2006 at Times Square Church where she met her devoted husband, Albert Venning Fiol, Jr.  Shortly thereafter, the couple were married on July 14, 2007.  They both served as Co-Leaders of the Newlyweds Ministry at TSC.
Luanna loved sports and completed the 5-borough tour in New York, as well as the NYC Marathon.  As a Family Nurse Practitioner, she was dedicated to her practice by providing holistic care to her patients, herself and family.  She expressed her enjoyment of working with immunocompromised patients.  She was passionate and devoted to her career; sharing her knowledge of health and wellness.
Luanna and Albert together provided a Christian home and foundation for their 3 beautiful children Chloe, Bryce and Arielle.  Luanna used her creativity, intelligence, wit and zest for life to weave memories and impart an indelible legacy for her family.  She loved to homeschool her children and teach them the ways of God.  The young family recently relocated to Charlotte, NC where Luanna served meals to volunteers at Elevation Church at Lake Norman.
She continued to channel her passion for health and wellness and set up her own business, coaching and empowering others to achieve the greatness she believed they could reach.  She fought many battles in her body over the years but never let them get the best of her. Luanna Bel was a brave woman who would never give up. Not on herself, not on her family, not on her friends. Luanna Bel, beautiful warrior, lived the full meaning of her name.
She is preceded in death by her grandmother, Isabel Henry.
In addition to her husband, Albert Venning Fiol, Jr. and 3 children, Luanna is survived by her mother Susanne Henry, father Milton Danglad, aunts Alice, Jenny, Dion, Linda, and Camille, mother in-law, Verneather B. Collins, father in-law Albert Venning Fiol, Sr., 5 sisters in-law, 4 brothers in-law, nieces and nephews and a host of extended family and loving friends.
To order memorial trees or send flowers to the family in memory of Luanna Fiol, please visit our flower store.