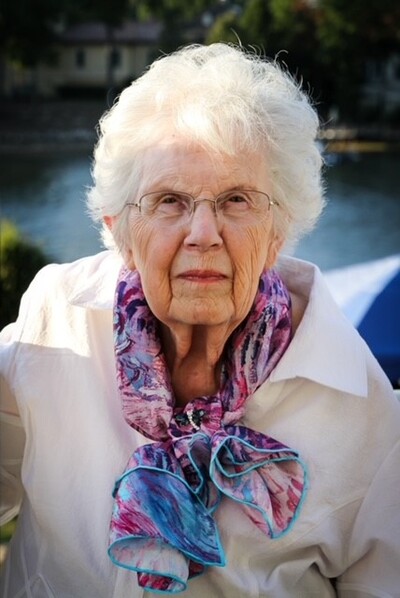 Marjorie Mae (Simmons) Jenest passed away on February 7, 2021, just three days short of her 92nd birthday, of natural causes after having survived COVID. “Mim,” as she was known to friends and family, died peacefully at her home in The Pines at Davidson, NC, surrounded by her family.

Born in Woonsocket, Rhode Island to Florence (Lepley) and Eugene Simmons, she was the second of three children. Soon after her birth, her family moved to Franklin, Massachusetts, where her father established the first Ford automobile dealership in that town. Marge entered grade 1 in the Franklin school system at the age of 4 ½ and graduated from Franklin High School, second in her class, at age 16. She attended Fisher Junior College in Boston, majoring in Business, and took a job at the National Wadding Company, a textile manufacturer. While at that company, she began dating Charlie, who was employed in the shipping department part-time while completing his bachelor’s degree in Chemistry at Boston College. Also a native of Franklin, Charlie completed his degree in 1951 and the couple was married that summer at the Franklin Federated Church.

The Jenests settled in Franklin and resided there until 1996. All four Jenest children were raised in the family home on Willow Street and all were educated in the Franklin schools. Marge loved the friendly small town where both sides of the family had deep roots and many generations of relatives. The Jenest home was full of warmth and love and activity, and Marge enjoyed hosting the extended family at holidays and other family celebrations. While she had many opportunities to work outside the home, her passion was raising her children, and she was a devoted wife and mother. The family was active in the Federated Church, where both Marge and Charlie served as deacons and senior leaders.

When her youngest child, Robin, entered high school, Marge went to work at the Franklin Florist shop, where her upbeat, sunny, witty personality made her a favorite of her co-workers and the shop’s customers. After the birth of her first grandchildren, Neil and Andrew, she became a doting grandmother and a frequent sitter for the young boys. Charlie retired at age 55, and the couple added travel to Florida, North Carolina, and California to their activities, visiting family and friends.

Marge was widowed at age 66, and the following year she made the decision to give up the cold northeast winters and relocate to Davidson. All of her children and grandchildren had moved away from Franklin by this time, and the desire to be with her family prompted her move. Again, she took up the role of adoring grandmother, this time to Colin and Peyton, for whom she was after-school caregiver and all-around pal.

In the early 2000’s, Marge’s daughter relocated to Davidson with her young daughter. For the next 13 years the three generations of Jenest women lived together, and Marge helped to raise granddaughter Rachel, meeting her at the bus after school and preparing her favorite snacks and supper items. Throughout her adult life, Marge never gave up the job of molding her children and their children into loving, caring, happy, hard-working individuals with strong moral compasses and a zest for life. It was, as she knew, the role she was born to play, and she gave thanks every day for the opportunity to care for her family.

Marge loved to cook and bake, to dance, to talk on the telephone, and to write. She was a beloved sender of cards, letters, and remembrances, and she always knew just what to say. She was eloquent far beyond what she saw in herself. She was hysterically funny and spread good cheer all about her. She particularly delighted in the family’s annual Easter egg hunt, for which she scattered handwritten, perfectly rhyming clues on her “Memo’s from Mim” note pad stationery. She made friends wherever she went and was a favorite in all the shops, stores, and businesses in Davidson. She loved the beach, particularly Cape Cod and Bald Head Island, and her children were in awe when she donned a bathing cap and headed out into the ocean for a half-hour’s swim/float/swim, always to return to shore with a smile on her face and an enthusiastic wave. She will be dearly missed by friends and family, yet we all know we were blessed to have her in our lives for as long as we did, and she will remain in our hearts forever.

Celebration services will be held in Davidson and in Franklin when the world becomes COVID-safe. Her ashes will be interred with her husband in the Union St. Cemetery in Franklin sometime later in the year.

To order memorial trees or send flowers to the family in memory of Marjorie Jenest, please visit our flower store.