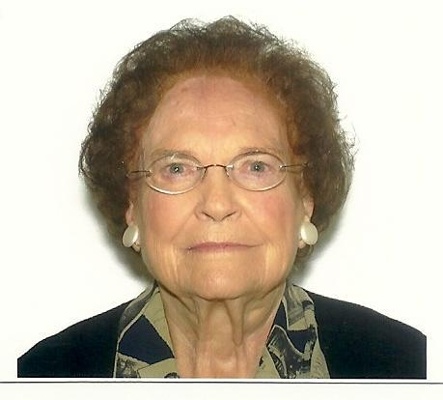 Born December 9, 1925 in Lubbock, Texas, she was the daughter of James Thornton and Ruth Ratliff Arledge.  She spent most of her childhood in Orange, Texas where she was a member of the 9th and Elm Church of Christ.  Marjorie graduated Valedictorian at Orange High School in 1942.  She was in the Bengal Guards, an All Girl Drum and Bugle Corp, and was thrilled to have marched at Soldier Field in Chicago.  She studied at Abilene Christian College, the University of Texas Austin, and the University of Texas Houston, earning a Masters Degree in Education.

Marjorie met and then married William Watt Strawther, Jr. on July 5, 1948 in Orange, Texas.  They had two sons, William Paul and Philip Arledge Strawther.  From there they moved to Houston, Texas where she was a school teacher.  There they were members of the Southwest Church of Christ.

In 1969 the family moved to Phoenix, Arizona where they enjoyed the beauty of the desert and camping, hunting, and fishing.  Marjorie became a stockbroker along with her husband Bill in the stock brokerage firm they began.  Tragically, their eldest son Paul died in 1991.  Their faith sustained them.  They were members of the Camelback Church of Christ at this time.  Upon retiring to Carbondale, Colorado, they enjoyed the majestic Colorado Mountains and outdoor activities.  Marjorie especially enjoyed four-wheeling and snowmobiling up until age of 90.  Bill and Marjorie were fortunate to have traveled extensively and particularly enjoyed a safari in Africa.  They also joined their son Philip, a plastic surgeon, on multiple medical missions to Guatemala with Health Talents International, treating children with cleft lip and palate deformities.  They were members of the Glenwood Springs Church of Christ when her husband Bill died unexpectedly in 2010. Marjorie then began spending winters at The Pines at Davidson to be closer to her son.  There she was actively involved and made many new and dear friends.  The Lake Norman Church of Christ became her new church family and their love, kindness, and compassion fed her soul until her death.  She passed away under the devoted care of The Pines staff and the gentle loving care of her caregivers who sang hymns and read the bible to her in her final moments.  Marjorie is survived by her son Philip and her brothers, James and Robert Arledge.  She also leaves behind numerous loving family and friends.

In lieu of flowers, memorial donations may be made in her memory to Health Talent International, P.O. Box 8303, Searcy, AR,  72145.

The family is under the care of Raymer-Kepner Funeral Home, Huntersville.  Online condolences may be left at kepnerfh.com.

To order memorial trees or send flowers to the family in memory of Marjorie Ann Strawther, please visit our flower store.