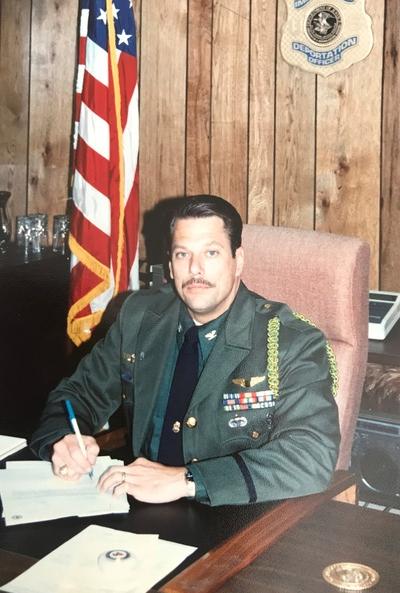 Nathan C. Davis II, a retired Special Forces Green Beret (Airborne) officer, longtime employee of the Department of Justice with the INS, and incredible father and husband, died unexpectedly while at home on February 19, 2022 at the age of 67.

Nathan was born in St. Albans New York on May 2, 1954 to Nathan C. Davis Jr. and Ferne Irene Snyder, the fifth child in succession of nine children. He graduated from UCSD Paramedic School as one of the top-5 students. He was a paramedic and a fire chief while serving in the
Army Reserves for the next 12 years. He went to Officer’s Candidate School at Fort Benning, Georgia, graduated in 1980, and all told, his combined military and federal law enforcement career spanned 34 years. His service included training and awards for seven military
occupational specialties (MOS), special operations deployments to Africa, Central America, Mexico, Cuba, Egypt, and across Europe as part of the U.S. Army Special Forces (1st, 7th, 12th & 19th Groups [Airborne]), and countless achievements, missions, drop zones and
counter-terrorism warfare stories to tell. This time culminated in retiring as a U.S. Army Captain (O-3) after entering as an E-1 when the adventure all started.

As his military career ran simultaneously and eventually wound down, he went to work for the Department of Justice within the Immigration & Naturalization Service (now part of Homeland Security). He was a detention officer and training officer, quickly moving up to the regional
offices in Laguna Niguel, CA, and then the Officer in Charge (OIC) in El Centro, Ca., where he excelled for 7 years. In that latter role, he set new highs for the agency, staff and operational efficiencies, such as achieving the first full accreditation of a detention and deportation facility in
the agency’s history, surpassing the state’s accreditation standards and subsequently creating an agency policy and procedure to achieve such accreditation across the enterprise. This achievement and level of outstanding service resulted in his receiving a Hammer Award from
the U.S. Vice President, earning this special recognition for having made innovative and significant contributions in support of reinventing government principles, programs, and levels of service. In his seven years of service in this OIC role, he brought a total of four facilities into full
accreditation for state prison standards. Also during this time, he completed the Executive Potential Program Graduate School, USDA. Naturally, he was a top-5 student here as well.

Nathan went on to lead at the national headquarters of the U.S. Immigration headquarters in Washington, D.C., as the Assistant Chief Enforcement Officer, the third-highest ranking enforcement official in all of the agency. In his time in this role, he was instrumental in
Operation Gatekeeper, Phase I and II, which resulted in reducing illegal border crossings at our nation’s busiest international border sector by over 75%. This program also created foundational aspects of the modernized enforcement strategy that addresses issues such as
criminal aliens, human trafficking smuggling routes, fraudulent documents, sentencing guidelines, staffing and facility resources, etc. effectively militarizing much of the enforcement of our southern border’s busiest sector. His time in D.C. often had him sitting as the lone
representative for the agency in meetings of The National Security Council, Joint Chiefs of Staff, and The White House.

The recognition and accolades for his service to his country are vast, although you might have never heard about it from him. His humble diligence to achieve the mission goal, and doing it in the most precise and efficient manner, is likely what you hear about each task he devoted
himself to. But among the recognition and accolades, you’d find he was twice-nominated by the Ford Foundation, John F. Kennedy School of Government, for excellence in Government Performance, a long list of military awards, medals, commendations, and awards for sustained
excellence in performance, as well as a Men Of Achievement award from Cambridge and continuous listings in the Who’s Who (in the West, in the East, in the World, and in America) publications. There is so much more to share about his achievements, like his top secret
security clearances and degrees earned, and his membership in the 50-Mile Run Club at Fort Benning, but for someone who never sought or basked in laurels, he sure achieved many of them.

Nathan was a wonderful father and a dedicated Christian. He was very active in his church and with youth groups, and introduced the love and grace of God to all walks of life he came in contact with. His love, compassion, and counsel to all was a wonderful and welcoming voice for
God. The list of contributions to his church family and community throughout his life are too numerous to list, but include trips with 40+ youth and adults to the desert to teach rappelling, land navigation by stars, survival skills, and canoe and camping trips down the Colorado River,
snow camping excursions in Big Bear, Ca., and trips to the shooting range.

He was an avid motorcyclist, loving to take long rides on his Gold Wing. He earned his private pilot license and enjoyed flying ultralight airplanes.

He loved to play guitar and sing with his family, friends, church family and youth groups. His love for teaching, learning, and sharing life and knowledge with others was truly special. He reached and blessed all of his family, friends, sons, daughter, in-laws, grandchildren, and even
total strangers with this gift on a daily basis. He especially had a wonderful way of reaching and enriching the minds and imaginations of children, with great patience, wonderful storytelling, and an infectious silliness and laughter. It was a very special trait of his. His love for helping people,
problem solving, innovation, and incredible work ethic and dedication defined so much of who he was and how he related to the world. His entire life was a life of service.

He was a problem solver who often took on difficult (impossible) and unwanted projects at work, DIY projects at home, and loved to make people laugh.

Later in life, as his service-related back injuries and accidents slowed him down, his spirituality grew deeper. His main focus in life was helping people know God, become saved, His studies and profound depth and understanding of the bible and its teachings became a staple of this
time and fostered incredible conversation with family and friends that will be greatly missed.

Nathan will be greatly missed, as his unique brand of encouragement and connection with all who knew him simply cannot be replaced. To his family and friends he was bigger than life, a force of nature, and a kingpin of character, resolve, and love that we all felt from him even when
apart from him.

All friends and family are welcome and encouraged to attend any and all of the following events
and services:

Flowers, donations, and sentiments can be sent to Raymer-Kepner Funeral Home at 16901 Old Statesville Road, Huntersville, NC 28078. Additional donations can be made in honor of Nathan and his service to the Green Beret Foundation at https://greenberetfoundation.org.

To order memorial trees or send flowers to the family in memory of Nathan Chilton Davis II, please visit our flower store.