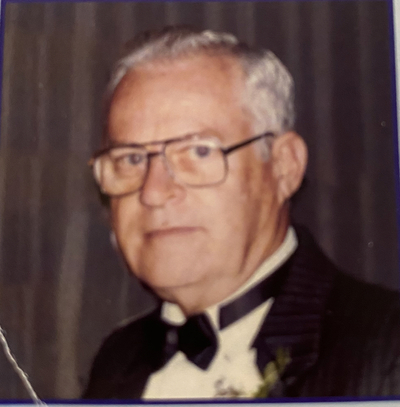 Philip J. Dorsey, Jr. age 92, died peacefully on Tuesday, January 21, 2020 in Huntersville, NC surrounded by family.  He was born in Brooklyn, NY on January 10, 1928 to Helen and Philip J. Dorsey, Sr.  He joined the Air Force in 1945, did his basic training at Chanute Field in Chicago and then was stationed in Okinawa until the end of the war. On March 24, 1951 he married Helen Dorsey and they raised three children together.  In 1970 he moved to Carmel, NY where he opened up his own successful real estate office and was referred to as the “Working Mans Friend”.  He was a Mason and was also known around town for the beautiful Christmas light display he put on every year.  He is predeceased by his parents and wife Helen of 44 years.  He is survived by his son Billy & Angela Dorsey of Huntersville, NC, daughter Katie & Edward Kendrick of Millsboro, DE and daughter Donna & Scott McLean of Lagrangeville, NY.  He also leaves behind six grandchildren (Chris Dorsey, Nick Dorsey, Kelly McLean-Dolan, Danielle McLean, Rebecca McLean, Anthony Dorsey) and one great grandson (Landon Dorsey). The Dorsey family has been blessed to have their dad for such a long time and will plan a Celebration of Life party to honor him at a later date!

To order memorial trees or send flowers to the family in memory of Philip Joseph Dorsey, please visit our flower store.