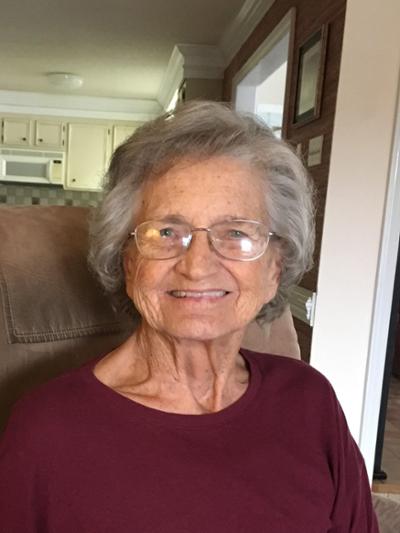 Sarah Wilson Beard was called home to be with her Lord and Savior on Thursday, August 8, 2019.

Sarah was born on December 2, 1936 in Charlotte to the late Lula Johnson Wilson and Damoes Bryant Wilson.

She attended East Mecklenburg High School. She married Gene Ranson Beard in 1954, raising her family in Charlotte and later in Denver, NC. Together she and Gene built two homes on Lake Norman over their 57 years together.

Sarah was a gifted seamstress taking delight in helping friends and family by creating everything from doll clothes to wedding gowns. Never one to sit idle she was always working on something. She made swings and hammocks, stained glass nativity sets and crafted for her church bazaar. Two accomplishments she was quite proud of were being given the Zaner-Bloser Handwriting award in school and receiving a trophy for the Longest Drive at Holden Beach driving range, both of which she proudly displayed in her home.

Sarah never met a stranger. Gifted with being able to strike up a conversation with anyone, her larger than life personality made those she met feel like they were special, learning all she could about them and never forgetting to say “hello” when she saw them again. A true hostess, her home was always open to family, friends, her Sunday school class, garden club or neighbors, making it a place anyone could come anytime. Sarah would annually hosther family’s Christmas party for all her brothers and sisters and their families. You would find her home filled with more than just family on any occasion as there was always room for everyone at her table.

An active member of Salem United Methodist Church, Sarah sang in the choir, played the hand bells, taught vacation bible school and was an active member of her Sunday school class. She loved the Lord her God with all her heart and followed his greatest commandments to love Him first and her neighbors as herself.

She was preceded in death by her husband Gene of 57 years and her daughter Sarah Marie Beard. She is survived by her daughters Glenda Schock (Winslow), Beth David (Jeff), Christine Lamano, her son Brad Beard (Amber) and her loving companion, Melvin Miller.

The family would like to extend their appreciation to special friends Sandy and Renee, from DaVita Hannah, Chelsea and Maurice; and from Levine & Dickson Hospice House, Elizabeth and Michaela.

A visitation will be held Sunday, August 11 from 4-6 pm at Raymer-Kepner Funeral Home in Huntersville NC. Funeral service will be Monday, August 12th at 11 a.m. at Salem United Methodist Church, Denver NC; burial at Elmwood Cemetery in Charlotte will follow the service.

To order memorial trees or send flowers to the family in memory of Sarah Wilson Beard, please visit our flower store.