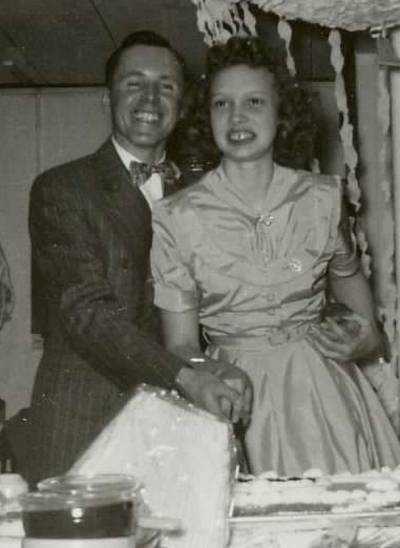 Shirley was born in Port Chester, New York, on January 19, 1936, to the late Sanford John LeFurgy and Kathleen LeFurgy.
Along with her parents, Shirley is preceded in death by her brother, Charles LeFurgy, and her granddaughter, Emily Logan Copeland.
She is survived by her beloved husband, Robert "Bob" Logan; her son, Robert Logan and his wife Andrea; her daughter, Joyce Keenan and her husband Michael; her grandchildren, Laurie DeEsch and her husband Doug, Robert Logan and his wife Emma, Brian Keenan and his wife Kristyn, and Bonnie Logan.  Shirley is also survived by her nine great-grandchildren, Trey DeEsch, Carrington DeEsch, Grace Keenan, Alasdair Keenan, Cassidy DeEsch, Robert Logan, Rosalind Keenan, Eleanora Keenan, and Miriam Logan.
A funeral service will be held at 10:30am on Thursday, January 20, 2022, at Raymer-Kepner Funeral Home in Huntersville, NC.  Shirley will be laid to rest at Salisbury National Cemetery following the service.
**The service will be live streamed here on the obituary at the time of the service for those who cannot attend**
Shirley lived her life as an example of her love for the Lord.  She dedicated her life first to the Lord, and then to her family.  She and Robert celebrated their 68th wedding anniversary in May of last year and they were a true testament of love, honor, and dedication to their children, grandchildren, and great-grandchildren.  She will always be remembered for her fierce love and loyalty to her family, and for her determination in all things. She spent her life caring for others with all her heart and what a blessing she was to all of us! What an honor it is for us to remember her, and to carry on her legacy.  Grammy, we love you always.
Condolences and memories may be shared at www.KepnerFH.com.
To order memorial trees or send flowers to the family in memory of Shirley Elizabeth Logan, please visit our flower store.