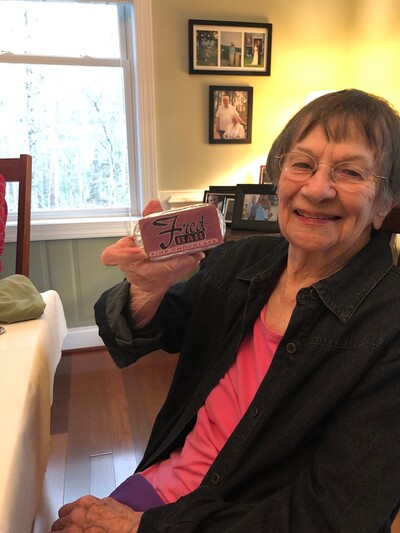 Winifred, aka Fred, Win, Wini, was born at home, with a midwife in attendance, #8 of 9 children. Her parents were Mary Domich and Anton “John” Mady, who emigrated to the states in the early 1900’s from what is now Croatia, and came through Ellis Island. We don’t know how they met. The seven children that preceded her were: Nicholas, Edwards, James, Dorothy, Richard, Raymond and Walter. They were born in NYC at 438 W 49th Street (a railroad flat), or Hell’s Kitchen as it was known. Eventually they moved to Forest Hills, which is where Walter, Wini and Jean were born; 91-32 71st Ave. She remembered her childhood as mostly happy (this is taken from her life story, which she started to write but never completed). They were poor, but didn’t really know it. Her mother was very fair and made sure that all the children were treated equally. She marveled at how her mother managed to take care of 9 children. Nobody was allowed to take anything out of the refrigerator without permission. Her mother was very protective of them and did everything she could to ensure they stayed safe. Her father was a milkman, and was an unhappy man. She attributed that to him being taken away from his mother at a young age and sent to the United States; he never got over it. He also had to stop working due to health issues; that was very hard on him and the family, and all the kids contributed to help.

She got her first job at age 13. She lied about her age so she could get the job. She worked at the local movie theater as an usherette. She made $8.00 per week. She gave half to her mother, and the other half was for her to buy her own clothes and things she needed. Her friend Florence also worked there. There was a police officer named Sullivan who walked the beat on Metropolitan Avenue and he would come by the theater every night at 9:30 and walk her and her friend to their streets, and watch them as they ran home.

She graduated from high school in 1946. She received the award for excellence in stenography and typing, called the Belden award. Her sister Jean received it three years later and her niece Nancy did later on as well!

Over the course of her career, she worked for a company who represented hotels and managed conventions, American Overseas Airlines, where she was assigned to the steno pool at LaGuardia Airport (and took the job to get free trips, smart!); secretary to the head of cardiology at Stamford Hospital, sold Tupperware, part time at Sears Roebuck,  secretary at St. Elizabeth Church, and retired from the USPS.

She met our father, Charles Henry Wilkins, through a guy she was dating at the time. Joe and Chuck were in the Navy, and Joe brought Chuck home with him one time and well, they fell in love. Their courtship was primarily through letters and unfortunately, at some point when she was cleaning, she threw them out. They got married on June 21, 1953 and up until that point, it was the hottest first day of summer ever recorded (in the upper 90s and according to what I could find 1953 and 1966 were the Summers with the most days of 100 degrees, so the record could still possibly stand).

They were poor when they got married; didn’t have two nickels to rub together (her words). Their first apartment was a furnished apartment on Baxter Ave in Jackson Heights. They finally found an apartment in Elmhurst on Judge Street that they could afford and slowly furnished it. Eventually, they were able to buy a house in Williston Park, where we lived until 1969, when we moved to Stamford, CT. Then, in 1976 we moved to Branford, CT. Chuck died the following Spring. Wini stayed in Branford at 17 Helen Road, surrounded by an incredible group of friends who became our extended family. At the age of 80, she sold her home in Branford and moved to Charlotte, NC.  Marlene said that Helen Road was never the same after she moved. How incredibly brave that was.

Over the course of her life, she worked hard, stood up for what was right, was a loyal friend and second mother to many. She was very caring and generous, and would happily help those in need who were less fortunate than she. She was very conscious of her upbringing, and worked really really hard to ensure that she could take care of herself, particularly after our father died. She loved to travel, was a fierce animal rights activist and lover of animals, (particularly wolves), a tennis and golf fan, a huge Michael Jordan fan (which included watching all the Bulls games during their heyday and leaving up a life-size cardboard Michael Jordan in her dining room for several years), and of course the biggest Frank Sinatra fan. His music runs through our veins. She was an artist, a baker, and candy maker (as the inventor of the famous Fredbar). Stubborn, smart, frugal, tenacious, a perfectionist, determined and undeniably authentic. She impacted many lives over the course of her life and for that we are very grateful.

In lieu of flowers, please feel free to make a donation to https://reflectionriding.org/, who has a wolf conservation program, or your favorite local animal charity.

We plan to have a celebration of life hopefully in early November in CT or NY, with multiple states and 2 countries there are a lot of logistics to sort out!

Grandmother to Kirra and Lachlan

Mother-in-law to Martin and Stela

2nd mother to so many of our friends

Friend to so many….

Almost 93 years ago my mother arrived in Queens New York; Forest Hills to be precise.  From the start she was strong, brave and fiercely independent. Nick named muscles as a kid for competitive spirit in all things from stick ball to bowling, she was a naturally gifted dancer who wanted to pursue that passion but was denied by her father. Her love of music - Frank Sinatra and big band swing in particular stayed with her throughout her life - I can remember her blasting the Chairman of the Board - Ol' Blue Eyes and floating around the living room as if on a cloud. In her 70,s she took up painting and became an accomplished artist whose many watercolors were in demand. She always encouraged me in music and art.

Her natural tendency to lead was ever present as she was awarded lay person of the year by the dioceses of Hartford, CT for building a strong caring community and became the first president of the residents association at Merrywood. She also led in caring for animals and children, raising money for a wide variety of causes.  Not left out were the many people the Win mentored and cared for.  Sometimes with a listening session. She  invented the Fredbar - peanut butter and Oreos in a chocolate bar, always in demand!  This came after a turn as a chocolatier making finely decorated Christmas and Easter that were the talk of the town. In my life she was the north star as my father checked out early and often and wanted to ensure that her children did not do the same. We were very close and she was my sounding board for my many interests.

In these last years we talked most every day and I taught her and we did together Open Focus meditations and journeys to the north woods to be with her pack of wolves, or to the moon to pray for the earth. I treasure those thousands of sessions and all of the time that we had together,  her stubborn mule-like tendencies notwithstanding. I honor her life as a great woman and a great mother.

A woman of many names to many people.

One of nine first generation New Yorkers, she was a child of the Great Depression.

Strong and fiercely independent she never backed down when she felt that she had been wronged.

Generous and kind, she supported many causes that she believed in.

She taught me so much about so many things. Her values were true, her honesty unwavering.

Her passing leaves a large hole in all of our lives. I will miss her greatly and I will never forget her.

I could probably write a novel about my mother. Maybe I will someday. I am acutely aware of how lucky I am to have had my mother in my life for so long, when I know many who have not. Our relationship was not always easy, but fairly early on we both worked really hard to sort out some things and it evolved into something incredibly special. It's funny, because somewhere along the way I stopped calling her Mom and started calling her Win. Or Fred. So did Gerry. I’m not really sure why. I’ve only occasionally come across others who called their parents by their first name.  She taught me so many things and impacted me in many ways, for which I will be eternally grateful. My best memories are baking Easter bread, making chocolates, listening to Sinatra, watching tennis and traveling together. Besides Sinatra, she did love all kinds of music, and I took her to multiple concerts over the years, including Bonnie Raitt, Natalie Cole and Eric Clapton at the Hartford Civic Center. We estimated at the time that she could have possibly been the oldest person there! We would have our music on and she would know the bands or musicians. One time, on a flight home from Charlotte, she saw someone sitting in first class, with a logo for Marshall Tucker Band. She knew them and specifically remembered one of mine and Gerry’s favorites, the live version of Ramblin, so she went up to him and introduced herself and chatted. And sure enough, it was Doug Gray, the lead singer! He was headed to New Haven to do an interview with WPLR and he gave her a copy of their latest CD, which I just found and it reminded me of that story. She told him about how much we loved that version!  Here are some life lessons that she taught us: Don’t be wasteful, particularly with food or money, as many people have neither. Stand up for what is right: make phone calls, write letters to politicians or companies (which I do regularly and it brings me a great deal of satisfaction. Matter of fact, I was unhappy with the discharge process after she broke her first hip so within days I emailed the entire executive team at Novant Health to point out the problems). Have a sense of humor! Of the several times she fell and did not get hurt, she pointed out to Martin and I when we helped her, that she wasn’t even drinking! There she was, lying on the floor, cracking jokes. Play poker, it's so much fun.  Quintessential Winifred!

To order memorial trees or send flowers to the family in memory of Winifred Evelyn Wilkins, please visit our flower store.